The story of Virabhadra, the Fierce warrior

Once upon a time in the celestial realms lived a young man, Lord Shiva, and a young woman, Sati (also thought of as Shakti). Shiva and Sati fell madly in love and were wed. Unfortunately their story did not end here. For Sati was the daughter of King Daksha, who never approved of his daughter marrying a dreaded hair yogi who danced, sang, and consumed intoxicants. To show his disapproval, Daksha through a huge party, inviting everyone in the universe except for Shiva and Sati. 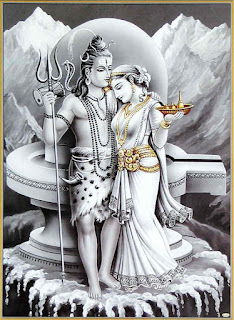 Sati heard about the lavish party that her father was throwing to punish her and Lord Shiva. Annoyed, she begged Shiva to go with her to the party in spite of her father’s wishes. As the wise Lord of Consciousness Shiva replied; “why go, were we are not invited?” Sati disagreed and decided to go alone.

When she arrived her father jokingly announced that she must have come to her senses and left her husband. Sati whom was not amused defended Shiva, even pointing out his divineness, his oneness with nature, and his supreme consciousness. She realized her father would never understand so she announced “since you have given me this body I no longer wish to be associated with it!” Determined she took her seat on the floor in the middle of the party and closed her eyes. She visualized Shiva and then through pranayama (breathing techniques) and other yogic exercises she cultivated her Agni (internal fire). Moments later she burst into flames, leaving the body her father had given her.

Out of devastation and grief of Sati’s fiery death, Shiva enraged tore out his hair (or a dread lock depending on which ancient text) and from this hair he created the fiercest warrior, which he named Virabhadra. Vira is the Sanskrit word meaning hero and bhadra means friend. Shiva instructed Virabhadra to go to the party and seek revenge for Sati’s death.

The actions that Virabhadra took that night in battle resulted in the asana poses we have come to know as virabradhrasana 1, 2, and 3:

Virabadhrasana 1: Virabhadra entered the party by breaking through the ground as he rose from within the earth clasping a sword in each hand.
Virabadhrasana 2: Moments later he spotted Darksha from across the room.
Virabadhrasana 3: Lastly he cunningly approachs Darksha while slaughtering the surrendering guests before he finally beheads Darksha. (pictured bellow) 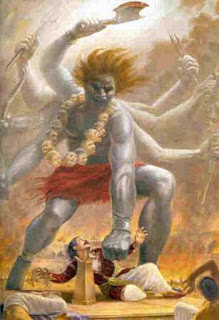 Shiva quickly came to the party to see what Virabhadra had accomplished. When he arrived he was heartbroken, his rage turned to sadness followed by compassion. He searched for Daksha, finding only his body. Filled with remorse Shiva found a goats head and placed it on Darksha’s headless body bringing his father-in-law back to life. After Darksha awakens, he recognized Shiva’s kindness and bows. Shiva walked away to be alone and remember his love Sati.

So...as we practice our warrior poses can we remember that we are destorying the ego!
at February 09, 2010