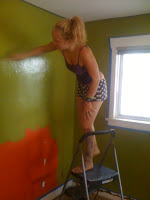 My husband and I bought our first home, which is definitely a fixer upper, four months ago. Saturday is a house improvement day for me. So today I focused on the dinning room: sanding, patching, painting.  It is very fun to watch the change that happens to the house as we both slowly but steadily chip away at home improvement projects. Its really reminds me that CHANGE IS POSSIBLE.

One of the comments I hear most frequently in response to me teaching or practicing yoga is "I cant do yoga, I am not flexible enough." This always makes me smile. In my head (and sometimes out loud) I think, well duh! Flexibility is NOT a requirement of yoga instead it is one of the side effects of yoga, so if you haven't been practicing yoga chances are you are not going to be flexible.

I like to share a personal example of this. When I first started teaching yoga 7 years ago to show his support my boyfriend at the time (now my hubby) came to at least one class of mine a week. He was a very stiff, strong biker who did not stretch. In his uttanasanana (standing forward fold) his hands were about level with his knees as be tried reaching for the floor. I being an inexperienced teacher would push on his back thinking that would help his hands get closer to the floor but he didn't even budge, he was that stiff! He has continued to take classes from me over the years and now he can fold all the way forward and put his hands under his feet and bring his forehead to his knees. Also his posture is more upright making him 1.5 inches taller then before he practiced yoga. He sells bikes and he loves educating his costumers on alignment and the benefits of yoga. (VERY COOL!)