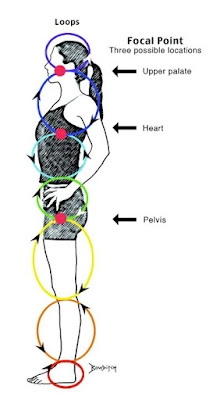 Yesterday at The Yoga Center I taught kidney loop. This is a loop I don’t specifically teach to often but I have been seeing lots of collapse in the low back and kidney area. I felt on fire teaching because kidney loop has been a refinement I have been working on for so long. I got to share all these little "secrets" and tid bits of information I have found with this loop.

For example, I had the students move to the wall and stand in tadasana with their back against the wall. I explained the loops here and the students got to feel kidney loop and got a good way to measure if they were doing it correctly. IT was probably only 15 minutes into class when one of the students exclaimed "this is hard". Then we moved through some basic poses: lunges, utkatasna, vinyasa's, uttanasana... but in every pose I waited for the students to cultivate a puff and broadening of their low back.

To me when I don't do kidney loop and I stand normally (collapsing) I feel like I am losing my energy or like my power is leaking out of me. When I engage this loop I feel like I put on my wonder women harness and I feel strong and super powerful. I could see this in the students as well. When they had they super yogi harnesses on (kidney loop) they would extend out more, they had more control over their bodies, and they had more confidence and strength in their eyes. This is probably one of my favorite gifts of teaching yoga, getting to watch students realize they are strong, and powerful or calm and clear and can do things they didn't think they can do, or feel a way they didn't think they could feel.

I told briefly the story of Hanuman, of how he had so many powers but that he was mischievous with his powers when he was young so the Gods got together and decided to cast a spell on him that he wouldn't remember that he had these powers. After this Hanuman needed to be reminded. One of my favorite parts of this in The Ramayana is when Hanuman is getting ready to leap over a giant ocean to rescue Ram's wife. But Hanuman doesn't think he can leap over it, he forgot he was powerful that he could grow giant and leap far and his friend had to remind him of his power. This is one of the gifts of the community is we can remind each other that we are powerful, we can even remind our self we are powerful. Hanuman Story

At the end of class the women were saying to me and talking to each other about how hard the class was. I was talking to a student later and she said, "it was so hard pulling our stomach in and opening our kidneys in every pose, but I liked it".

Email ThisBlogThis!Share to TwitterShare to FacebookShare to Pinterest
Labels: hanuman, kidney loop, my class, my experience