Here is the hanuman stroy I shared in the class I subbed yesterday. My theme was about using muscular energy to help with integreation to help expeirence more confidence on and off the mat. I love this wonderful story and have been finding it very instpirational lately. 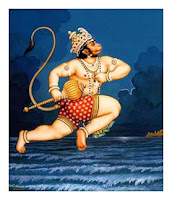 After Hanuman was given power he started to create a lot of chaos and havoc when he was little so all the gods prayed to Lord Brahma to find a solution. Brahma put a curse on Hanuman to protect the world from his mischief by removing his knowledge of his powers. One of his powers is becoming very big and strong. However the only way this power is available to him is if he or someone else (normally his friend Jambavant) reminds him of his powers. When Hanuman was older and was a dedicated server of Lord Ram he was chasing after the demon Ravana to save Rams beloved Seeta. Hanuman chased Ravana to the edge of a vast ocean and then lost Ravana’s trail. Hanuman was defeated and there is page after page in the Ramayana of hanuman’s thoughts, about how he let down Ram, how he can’t do anything right, his disappointment over himself…. Then his little friend somewhat elbows Hanuman and reminds him of his power, of his past victories, of his strength. As hanuman remembers he comes into integration and then has the confidence to get big and strong and he leaps over the ocean. (I love this story because even Gods can feel defeated, even gods need to be reminded of their greatness).
resource for picture: hariharji.blogspot.com
at January 16, 2011

Email ThisBlogThis!Share to TwitterShare to FacebookShare to Pinterest
Labels: hanuman, my experience, myth