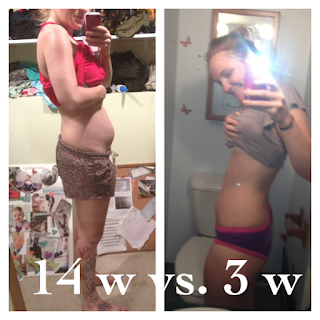 
This week’s major developments: This week's big developments: Your baby can now squint, frown, grimace, pee, and possibly suck his thumb! Thanks to brain impulses, his facial muscles are getting a workout as his tiny features form one expression after another. His kidneys are producing urine, which he releases into the amniotic fluid around him — a process he'll keep up until birth. He can grasp, too, and if you're having an ultrasound now, you may even catch him sucking his thumb. (babycenter.com) 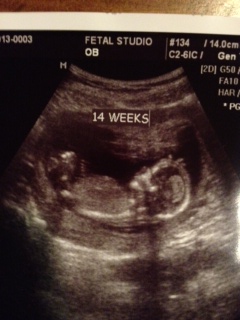 Sleep? At the beginning of the week was tuff. Morning sickness shifted to night time sickness and I was running from bed to bathroom multiple times but that has died off (knock on wood).


Food Cravings? Beef Jerky and peanut butter, banana and honey sandwiches. It’s been nice not feeling so sick lately. I have been able to eat salad without wanting to vomit and other veggies which is very exciting.


What I miss? My yoga practice.


What do I love? Feeling more pregnant. After finding out the gender it feels so much more real and I feel even more attached to baby boy Hoggan that is growing inside my belly.


Movement? I thought on 14 weeks 5 days I felt a little twinge or maybe a little twitch while I was driving, but I am not sure.


Symptoms? Stuffy/ sneezy nose, exhausted, some nausea but it is slowing going away


Best moment of the week? Finding out the gender!!! It was so exciting. We went for an elective ultra sound and the ultra sound tech used to be on OB in Europe but would have to go through school to be an OB in the states so he opened up this little shop with his wife. He was so knowledgeable he showed us the 2 hemispheres of the brain, the stomach. He even called our son a yogi because he was sitting in a cross legged position the whole time.


Exercise? Walking the dogs about 1 hour/ 5times a week. I have been trying to lift weights but it didn’t happen this week.


Yoga? Some seated hip openers and some rhomboid upper back work. Really gentle.


Maternity Clothes? I am going shopping on Monday for “official” maternity clothes but I did buy a lot of bigger tanks and some bigger dresses non maternity style.


Meditation? I got a meditation cd from Harshada Wagner and I have been doing some of his online correspondence courses for pregnancy. It has been really great a lot of focus on connecting with baby, relaxation, surrounding baby with love, light, health. I have been finding a spot to sit for 15-20 mins on the hike with the dogs and listening to one of these guided meditations it’s been really nice.