I have been re-reading my Gita's and made a new chapter summary. I posted another blog in 2010 summarizing the Gita with bullet points and quotes. 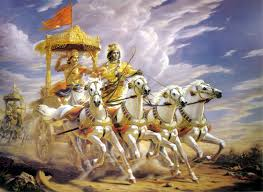 
(Krishna teaches about karma yoga, the yoga of selfless action)
The story begins on the battlefield between two cousins the Pandavas (the good guys) and the Dhaartaraastras (the bad guys), Arjuna leads the Pandavas, they do what is right in the kingdom while the Dhaartaraastras use trickery and deceit so Duryodhana can hold the throne illegally. To uphold dharma war is necessary. Arjuna had the choice between having Krishna’s army or Krisha. He chooses Krisha to be his chariot driver and Duryodhana chooses Krishnas army. The story begins with Krisha driving the chariot out in between these two armies and Arjuna says “I can’t go through with it”.


Arjuna tells Krishna “I am your student” and asks “what should I do?” Then Krishna begins his teachings. Krishna reviews the 5 acts of Shiva, he talks about how to be established in wisdom and says the supreme goal is to know your real nature and seeing the Divine in all.

Chapter 3: Get off your ass
Karma Yoga
Arjuna recognizes that he wants total freedom (moksha) and enlightenment. But Krishna tells him to get off his ass and join the battle. He says don’t avoid work, perform your duties but don’t be attached to the fruits of the outcome. Krishna also talks about obstacles on the path.

Chapter 4: Got Wisdom?
Karma Yoga
Krishna explains that he is absolute divinity manifesting in human body of Krishna. Avatars, like Krishna, appear on the planet when dharma has been disturbed. He explains the different levels of reality and that the duality in the world is ultimately an expression of wholeness, a single reality, Brahman. The gunas are mentioned. There is more talk about action and wisdom to see the oneness.


Chapter 5: See god in everything and align with that
Karma Yoga
Arjuna asks Krishna what path is better selfless action or the path of renunciation of action. Krishna says both actions lead to the supreme goal but the path of selfless action is better (5.2). The true goal of action is to gain knowledge of the Self, and Krishna encourages equal vision which is seeing the Divine in all. Krishna also talks about Samadhi.

Chapter 6: The Power of Meditation
Karma Yoga
Krishna gives an explanation of mediation similar to The Yoga Sutras. He encourages one pointed mediation and resting in the Divine. One aspect of meditation is the process of noticing habits and tendencies that disturb the peace of the mind. Krishna says to meditate sitting, in a quiet, clean and uncluttered place, to purify the mind. He uses the terms sthira and sthitah, to indicate a sense of unwavering steadiness. He also talks about who the true yogi is. He encourages moderation on the path.

Chapter 7: I am the Universe
(Krishna starts talking about the jnana yoga, the yoga of knowledge)
Krishna is revealing the truth of himself to Arjuna. Krishna says “I am the cause of the entire creation and its ultimate dissolution.” He talks about Maya and suggests devotion as a way to find the divine in the ordinary. Krishna speaks about prakrti but not with duality like in The Yoga Sutras but in wholeness.


Arjuna begins the chapter by asking about Brahman and what happens at death. Krishna answers by talking about the cycles of birth and death to teach about how there is the changing world which is a reflection of the unchanging Brahman. Arjuna learns the only thing that brings moksha (liberation) is knowledge. Krishna also discusses nature, celestial realms (lokas,) and cosmic time scales (yugas).

Chapter 9:  Krishna tells us a secret
Jnana Yoga
Krishna speaks about being the Supreme Being who has created the world and lives in his creation. He also says there iare many ways to become lost in the world. He talks about the secret knowledge that even if you hear it, it is rarely understood. He says “fill your mind with me; love me; serve me; worship me. Seeking me in your heart, you will at last be united with me (9.34)”.

Chapter 10: Krishna is Everything and Oneness
Jnana Yoga
Krishna reveals himself the supreme personality of Godhead, the source of all, the one who is the reality behind the many, beyond duality. Krishna is Arjuna’s inner most self, Krishna is Vishnu, the sun, Shankara, Indra, Rama, The Gayatri...all the seasons, al the flowers, the symbol Om. Krishna answers Arjuna’s question about how he should meditate and he tells Arjuna about his secret powers. The five acts of Shiva are brought up. After explaining all of this Krishna reassures Arjuna and says “But what is it to know all of these details, Arjuna? Just remember I am and that I support the entire cosmos with only a fragment of my being (10.42)”.


Chapter 11:  Trippy Spiritual Vision
Jnana Yoga
Arjuna asks to see Krishna “as the supreme ruler of creation”.  Krishna shows Arjuna his full nature as God himself, the Lord of the Universe. However this can’t be seen with physical eyes so Krishna gives Arjuna a special eye so he can see the endless forms, blazing suns, countless arms, mouths, devas, devils, saints, saddhus, heaven and hell. Arjuna gets afraid when the light of God becomes a fire that burns and consumes all things, he sees people being killed and burning. This teaches Gods radiance is both a great light and a burning fire. Arjuna asks for forgiveness and then asks to see Krishna’s more human face.

Chapter 12: The path of Love = Bhakti
(Krishna teaches about Bhakti yoga, the path of love and devotion)
After witnessing Krishna’s awesome Universal Form Arjuna wants to know how to be a devotee and Krishna suggests Bhakti yoga, the path of love. Krishna encourages Arjuna to have a regular meditation practice because love and devotion can be cultivated through regular practice. “Those who set their hearts on me and workshop me with unfailing devotion and faith are more established in yoga (12.2)”.

Chapter 13: Knower and the Known
Bhakti Yoga
Krishna explains the nature of purusha and prakriti, using other terms like kshetra (prakriti),  kshetrajña (purusha), and jñeya (also purusha). He explains more about jnana, values, attitudes, and having a mature mind ready for knowledge (brahma-vidya). Krishna says that by developing knowledge one can become free from material entanglement.

Chapter 14: Gunas
Bhakti Yoga
Krishna explains the three gunas more which are forces that bind and control all conditioned. A soul can transcend these modes through devotional service. Krishna says the gunas appear and disappear the one steady is Brahman, he alone remains. Atman is Brahman. The Jiva is Brahman. Understanding this and seeing the truth of Self is Brahma vidya.

Chapter 15: Detach from the tree
Bhakti Yoga
Krishna begins by comparing the material world to a gigantic, upside-down banyan tree of samsara. He says detachment is the key to see through the delusion of samsara. Krishna also talks about the jiva, the subtle body, reincarnation, the need for maturity, and the perishable verses the imperishable.


Chapter 16: Spiritual Mindset
Bhakti Yoga
Arjuna asks how to move toward a spiritual mind set. What should he do? What should he avoid? Krishna lists 26 values that need to be nurtured and understood to gain spiritual wealth. Krishna lists the qualities to avoid. He ends the chapter by saying instead of desire, anger and greed one should cultivate positive qualities and follow the teaching of Vedas.


Chapter 17:  Shraddhaa
Bhakti Yoga
Arjuna asks why people behave the way they do. Krishna talks about shraddhaa, deep faith and trust. He talks about how the gunas related to shraddhaa in terms of peoples temperament. Krishna talks about performing rituals and about the yamas and niyamas. Krishna ends the chapter by explaining ‘om tat sat’.


Bhakti yoga
Krishna ends his teachings by restating the first teaching verse. “Giving up all karmas, take refuge in Me alone. I will release you from all karma; do not grieve”. We are also told this In The Yoga Sutras of Patanjali with “Ishvara Pranidhana” surrender to Ishvara, the Divinity. This is our first principle Open to Grace! After narrating this conversation to Dhritarashtra, Sanjaya predicts Arjuna will win the war because he is surrendered to Krishna.

Email ThisBlogThis!Share to TwitterShare to FacebookShare to Pinterest
Labels: The Bhagavad Gita